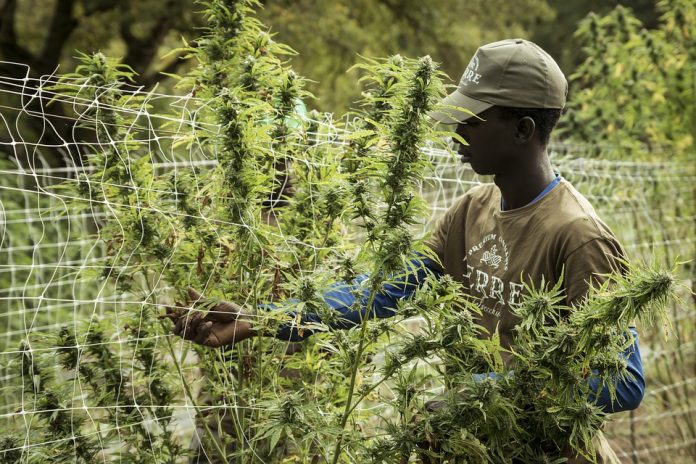 U.S, (GREENENTREPRENEUR) The Grow-Off is a super dope contest, and recently I hopped on Zoom to talk to some of the winners about what strains they’re working on, excited about, and like to smoke most. Here’s what Duran Jackson, the 2020 CO Grow-Off Champion in both Potency and Terpenes, and Fiddler’s Green, the 2018 CA Grow-Off Champion in Potency, had to say.

These Grow-Off champions (and more) were featured in Mastergrass: Cultivation Conversations on April 10, 2021, sharing their knowledge on how to grow a winning crop.

Duran Jackson is the Veg Lead at Colorado’s Evergreen Extracts, and 2020 King of the Grow-Off after bringing home First Place in both categories with a cut of Spritzer that he grew at the crib. He also won the 2019 Grow-Off for Potency. What a legend.

Jackson’s passion for weed screams through his big bright smile. Though he’s just growing as a hobby for now, he hopes to one day release his own flower — or own his own dispensary — in a market less-saturated than Colorado. And his heart is in the right place: he’s about buds over branding and quality over exploitation. “As a consumer, I smoke a lot and I want to be the best. Since I’ve been in the industry, that has been the case. So when I do a business, I would like to get my quality out, instead of focusing on [where I’m going to expand]. I would just like people to know what quality looks like first off, because there’s not a lot of people pushing information about good, clean cannabis, or what bad cannabis is.”

In our conversation, Jackson told me about some of the strains he’s growing in his home garden, as well as what he likes to smoke, “I’m flowering Sundae Driver; I’ve got Strawnana; Gelato Cake is the one that I run a lot, a Pakistini landrace, and I’m playing around with making stuff myself.”

“GSC was kind of big when I [moved to Colorado]. There was this one dispensary that had this strain 09 GSC. I’ve hunted that clone ever since I’ve been here, and I just got that clone in my garden a couple months ago. So I’m going to have my favorite smoke in my garden, I’m excited about that.” Jackson only smokes his own weed.

Fiddler’s Green is a family farm in California’s Sonoma County, owned by Cameron Hattman and Shannon Hattman. Those two are classic humans, man. True representations of what the plant is all about. They didn’t even enter The Grow-Off to win, they just wanted to party with a room full of stoner homies and ended up winning the Championship belt (literally, the trophy is a belt) for Potency and Third Place for Terpenes.

Fiddler is working on bringing back the old school genetics in a world that champions THC as a quality indicator.“The strains that we’re seeing and representing from some of our small family farms are going to be all of these cultivars that have been hidden and unable to make it to market, they’re going to come out and blow everybody’s mind,” said C. Hattan about releasing strains that have been overlooked for testing under 20%, but are still absolute slobberknockers.That includes ACDC, OG Kush, and Durban Poison.

Sundae Driver was bred by Cannardo Genetics. It’s a cross of FPOG and Grape Pie with a fruity, creamy flavor. It’s a pretty smooth hybrid for a late afternoon or early evening type of chill.

Strawberry Banana, Strawnana for short, was bred by DNA Genetics. It’s a cross of Banana Kush and Bubblegum that produces a fruity aroma. It’s a great anytime-of-day smoke for anyone that needs a lil’ afternoon delight.

Gelato Cake has the same genetics as Ice Cream Cake: Wedding Cake crossed with Gelato #33. It has that sweet, hashy, gassy flavor that Gelato kicks out, and is relaxing and potent, so you’d probably be best off saving it for later in the day.

09 GSC is just an old school cut of GSC, which was bred by Cookie Fam. GSC is a cross of OG Kush and Durban Poison that holds legendary status on the West Coast. It’s got that classic stoney hybrid feel to it.

AC/DC is a phenotype of the CBD-dominant Cannatonic. It’s earthy, and somewhat sweet on the flavor profile. The high, well, there isn’t one; instead, there’s a clear-headed experience that may help turn a bad day around.

OG Kush is OG Kush. Its origin story depends on the day and who you’re talking to. If you consume it, expect a heavy, long-lasting euphoria that’ll make you want to chill out for the day or go to sleep for the night, depending on how much you smoke.

Durban Poison is a classic African landrace strain that people love for its energetic qualities. Ed Rosenthal brought it to fruition, and we’re damn thankful for this earthy, spicy-flavored treat anytime you can find an authentic cut of it.

For honorable mention, we’ll talk Forbidden Fruit. Forbidden Fruit is a fruity, delicious, purple, and perfect cross of Tangie and Cherry Pie. If you find it, get it with swiftness, because it might be gone the next time you want it.